There are a variety of collectors sold for purifying restaurant kitchen exhaust systems. The most common are:

I’m going to try and make a case that electrostatic precipitation is the best solution for most applications.

The best systems are two-stage precipitators, the first stage charges the particulate. When the contaminant passes through the corona an electric charge is imparted on the particulate. In the second stage the particulate is collected on negatively charged plates, the plates require periodic cleaning. 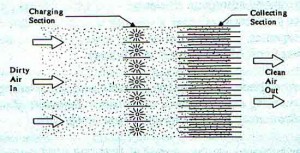 Why do I think electrostatic precipitators are the best choice? I’ll first detail what I think are the downsides of the other methods.

Using barrier filters is an effective way to filter contaminants in an air stream. Most of these systems use an array of filters in series to try and increase main filter life. The first stage is generally a throw away low efficiency paper filter which can be fairly inexpensive, or a metal grease filter, which are more expensive, but washable. The second stage is generally a more efficient and expensive paper type filter. Usually the efficiency of these barrier filters is in the 90-95% range, which is pretty good. As more and more particulate is captured by the barrier filter, it gets more and more efficient, but also loses airflow due to increased restriction. Eventually the restriction is too large and the filter is spent.

Assuming it’s a “standard” size, you can probably get them from a local filter supplier to save money, but sometimes they are designed specifically for the OEM air cleaner manufacturer and then can only be purchased from them thus they may be more expensive. The last stage, if they have one, is the safety filter, which is usually a higher efficiency, and much more expensive filter. Depending on the efficiency of the filters, you could capture up to 99.97% of particles down to .3 microns, which is regarded as HEPA efficiency. As the “safety” name implies, you have these just in case there’s a breach in the main filter. You hope that never happens, which will increase the life of this filter, but eventually they will have to be replaced.

When the time comes to replace the set of filters, depending on the size of the air cleaner, this can be very costly. And depending on what’s cooking, they may have to be replaced several times a year. A major downside of barrier filtration in commercial kitchen exhaust systems is the reduction in airflow due to filter loading. The filters will load to a point where air cannot pass through. At this point smoke cannot exit the duct system and the kitchen will fill with smoke and other harmful contaminant. This can cause a whole array of problems not the least of which is closing the kitchen until the filters can be replaced!

Another downside to barrier filtration is the filters themselves. Once they are spent they must be disposed of and this is not environmentally friendly. If you imagine how many restaurants there are, just in the USA you can easily then imagine how this could have a big impact on landfill loading.

The second method used most often is UV. In this system particulate in the exhaust air stream is subjected to high intensity UV light. The UV light is supposed to remove cooking odor and grease.

Many of these systems use grease filters as a pre-filter to extract as much of the grease and smoke as possible before the contaminated air stream is passed over the UV lights. Manufactures claim these are high efficiency but most grease filters are about 35% efficient on particles less than 10 microns. Here’s a comparison of grease filters from American Society of Heating, Refrigerating and Air-Conditioning Engineers, Inc. that may be of interest.

Then the UV is supposed to take care of the remainder of the grease and odor.

The shortfall with this technology is that there’s nothing in it to remove the smoke that’s generated during the cooking process, so that either gets exhausted to the outside of the building or the roof, or must be collected with a barrier after filter, which will eventually need to be replaced. As does the odor which doesn’t get catalyzed.

There’s also some question on my part how particulate that’s traveling at 500 feet a minute or more would have enough UV residence time to be effective.

In addition some UV may be harmful to humans if exposed long enough, or in direct line of sight.

The last issue is that the bulbs will have to be replaced causing downtime and probably at considerable cost.

So what’s the best solution? In my mind it’s the electrostatic precipitator.

The ESP starts with relatively high efficiency when sized correctly and when cleaned properly will maintain that efficiency without compromising air flow (no smoke backing up into the kitchen!). And usually they are less expensive to install than barrier filter systems because restriction across an ESP is significantly less than that of a barrier filter when material is collected on it. This means smaller air movers with lower power consumption (environmentally superior!) 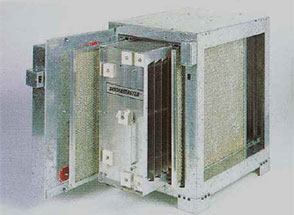 The precipitator cells are washable thus they are cleaned rather than thrown away and replaced (No filters headed for the land fill!) In addition, many systems come with a self-cleaning option which will eliminate the need for periodic manual cell cleaning. The self-cleaning feature can be set up to run daily or weekly and will “wash down” the collected grease and smoke. Some wash arm systems are better than others. Typically ones that are dynamic which traverse the cell as well as oscillate back and forth work better than stationary wash arms. These dynamic systems use much less detergent and water than stationary systems so again they are environmentally superior plus less expensive to own and operate.

Odor control, if necessary, is usually accomplished using a carbon bank filter system. The adsorbent material can be either coconut shell carbon or a blend. Depending on the composition of the odor efficacy may be increased by using potassium permanganate in a blend. 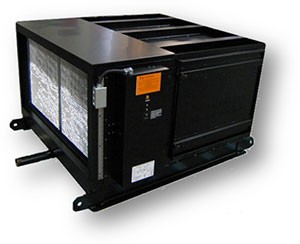 When choosing a ESP provider, look for one who has their collected listed to UL 710 and UL 867 to make sure they meet most municipal codes. In some locations other listings are required, like the MEA in New York City. 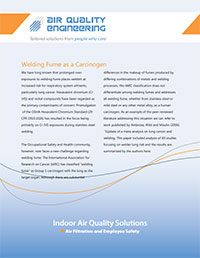